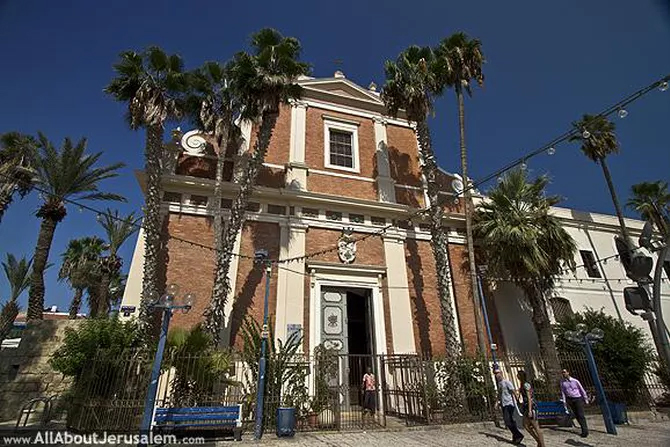 This Catholic Church sits at the top of the Jaffa Mound, at a strategic spot, and has served as a Christian center for thousands of years. Underneath the church and to its side are the remnants of a crusader fort, underneath which a Byzantine church is buried. The fort was part of the city citadel during the reign of Louis IX, king of France. In the church courtyard stands the statue of Louis IX, who was canonized in Christian tradition for his part in the crusades.

According to accepted history, the church also hosted the French general Napoleon when he stayed in Jaffa during his campaign in Israel in 1799.

The church is very large and is noted for its splendor. It was constructed in the beginning of the 20th century in the Baroque style, with a long nave and a vaulted ceiling. As opposed to most churches which face east, St. Peter’s faces west, towards the sea, where Peter’s famous dream took place, and towards Rome, where he was sent later.
The walls of the church are decorated with oil paintings depicting the Fourteen Stations of the Cross and St. George fighting the dragon. Over the altar is a depiction of Peter’s visitation in a dream by the angel Michael.